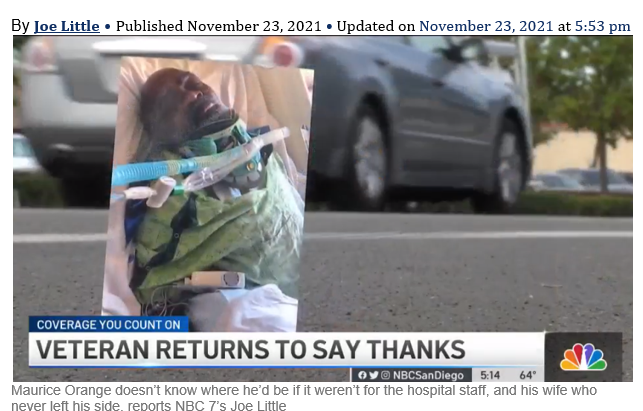 Maurice Orange doesn’t know where he’d be if it weren’t for the hospital staff, and his wife who never left his side

Maurice Orange doesn’t know where he’d be if it weren’t for the hospital staff, and his wife who never left his side, reports NBC 7’s Joe Little

He’s a tough guy. He’s a Navy veteran and a soon-to-be 9th-degree Blackbelt.

But you’ll forgive Maurice Orange if tears well up in his eyes.

“I don’t know how to say thank you without crying,” said the Rancho San Diego man as he was reunited with the Sharp Memorial Hospital medical staff that saved his life.

On Aug. 14, 2020, El Cajon police said a car cut in front of Orange’s motorcycle and Orange didn’t have time to stop or swerve. The collision left Orange with a traumatic brain injury, countless broken bones, a collapsed lung, and severe nerve damage in his left arm that eventually was amputated.

Tuesday, he arrived to tell the Sharp Memorial staff thank you.

“I was constantly reminded that I was someone special,” he said. “It’s because of you that my dreams have been saved.”

However, Orange credited his wife Cheri with keeping him going through the painful months of recovery.

“For me, it was Cheri and Cheri made all the difference in the world,” he said.

“You don’t know you can do it until you have to do it,” Cheri Orange grimaced. “It was the worst thing that ever happened.”

Nurses, doctors, techs, and therapists circled the couple as Orange spoke from his heart.

“You’re here because you did something fantastic that will never be forgotten as long as I live,” he said.

Cheri Orange said the crash is still being investigated. She said the young man who was driving the other car was never charged with a crime.