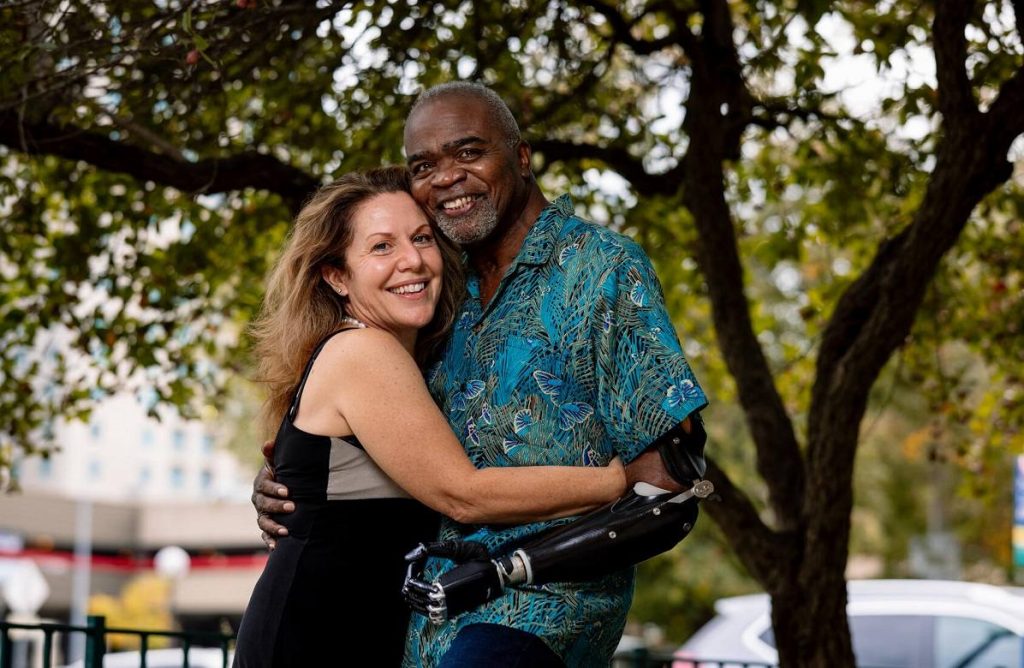 His fiancée, Cheri, knew something was wrong that afternoon — Aug. 14, 2020. She got a call that Maurice hadn’t shown up for work his usual two hours early at the martial arts studio he owns.

Then, her heart sank further. She heard there had been an accident involving a motorcycle near the couple’s home.

The following details were a blur.

Maurice was reassessed at the scene and determined to be alive. He lost a lot of blood. He had a collapsed lung, a fractured pelvis and broken ribs. His carotid and vertebral arteries were severely damaged. He had brain swelling, a subarterial hemorrhage and deep lacerations on his chin, upper lip and more. His left arm sustained significant damage — a broken wrist and dislocated elbow.

The only glimmer of hope? Maurice’s pupils were responsive.

“I hung onto that positive sign like a thread for the rest of the journey,” she says.

Maurice, a Navy veteran, is a taekwondo grandmaster who has been practicing since age 10. He relishes physical tests. The next year would prove to be the most challenging one he’s ever experienced.

Five days after the accident, Maurice was stable enough to undergo the first of several surgeries. One inserted two rods in his pelvis. Another, two plates in his left forearm. A third reconstructed his left wrist.

Two weeks after the accident, he could open his eyes, follow commands and make small, intentional movements — wiggling his fingers and toes and giving a thumbs up with his right hand.

Maurice transferred to a long-term acute rehabilitation center to continue his treatment. Surgeons placed a hole in his neck to access his windpipe to help him breathe with a ventilator. Maurice also wore neck and back braces. He made slow, steady physical progress but was struggling mentally. Due to the COVID-19 pandemic, Cheri was not allowed to visit him.

“I didn’t know who I was, where I was or why I was there,” says Maurice. “I didn’t remember anything about the accident. Being a martial artist for most of my life, I was in a fight or flight mentality. I felt the need to protect myself from the masked strangers — nurses — continually coming up to me, poking me and speaking three different languages.”

By mid-October 2020, Maurice was breathing on his own. He transferred to a skilled nursing facility for his substantial rehabilitation needs. This time, Cheri was able to visit him through a window. By November, Maurice could walk up to 10 painful steps at a time with a cane.

Finally, in December, Maurice returned home for the first time in over three months. He needed a wheelchair and 24-hour care, but he was glad to be home.

On Dec. 14, he and Cheri got married in a small ceremony. By February, Maurice sat in on classes at the martial arts studio, high-fiving and coaching the students and their parents. He was eager to be back in his element.

But something still wasn’t right. Maurice’s left hand and arm had gotten infected in the hospital and still hung limp at his side. His fingers were swollen and locked, and his elbow was still dislocated.

The crash damaged a network of nerves that send signals from the spinal cord to the shoulder, arm and hand. This damaged network, known as the brachial plexus, can leave the arm paralyzed.

His local doctor realized Maurice’s injury wasn’t getting better. She reached out to Alexander Y. Shin, M.D., a hand surgeon at Mayo Clinic, for a consultation.

In February 2021, the Oranges traveled to Mayo Clinic in Rochester, Minnesota. They met with Dr. Shin and a group of experts who had assembled to work on Maurice’s case. The team included physiatrist Keith A. Bengtson, M.D., orthopedic surgeons Mark E. Morrey, M.D., and Allen T. Bishop, M.D., and neurosurgeon Robert J. Spinner, M.D.

Maurice’s care team consulted with the Oranges, and together they determined amputating his infected forearm would be the best option. The team would also relocate his elbow.

Dr. Shin explained to the Oranges that Maurice’s hand would never function exactly like it did before the accident. Luckily, Maurice is right-handed, so Dr. Shin’s goal was to equip him with the best possible “helper hand” in the form of a prosthetic.

“He said to us, ‘Sometimes to become whole, we have to take you apart first,’” says Cheri.

“I have never seen medical professionals conduct themselves like the professionals at Mayo Clinic. It was a humbling feeling to be treated with such respect and care.”

Maurice went into surgery on March 3, 2021. The procedures, which lasted about 11 hours, went well. He had one more elbow surgery a few days later, and then they were able to return home.

Maurice and Cheri say they were in awe of the open, honest, kind, professional care they received from everyone at Mayo Clinic.

“I have never seen medical professionals conduct themselves like the professionals at Mayo Clinic,” says Maurice. “It was a humbling feeling to be treated with such respect and such care.”

Upon return to San Diego, Maurice completed a full-time rehabilitation program. In September 2021, the Oranges traveled back to Mayo Clinic so Maurice could be fitted for a prosthetic hand at an independent prosthetic laboratory.

When Maurice learned that his new hand could be made to match his right hand — skin color, hair, fingernails and all — he said, “Absolutely not.”

“I wanted my new hand exactly the way it comes out of the box,” he says. “My plan is to be known as the bionic grandmaster.”

With his helper hand, he continues to get even closer to normalcy. He intends to practice martial arts again and has already hosted friends, grilling steaks for them.

MAURICE ORANGE: “With my prosthetic, for the first time since my injury, I’m able to cut my own steak.”

Mayo Clinic is solving the world’s most serious or complex medical challenges — one patient at a time.

Make a gift to the Mayo Clinic now to help transform the future of health care today.

Eds Note: The individuals featured in images were following social distancing guidelines, and in compliance with Mayo Clinic’s COVID-19 safety guidelines while unmasked.